On 9, 10 January 2015 as a part of the project «Public service for penitentiary control» we kept inspecting the Ivdel colonies. This time Sergey Kirillov and me have visited the penal colony № 63 where we couldn’t have got in there for more than two months.

That day it was minus 46 outside.

While calling to the Federal Service for Execution of punishment, we were saying that we would inspect medical department either.

While we were expecting at check-point; beautiful cars began showing up. It turned out that prison authorities were coming over. In 30 minutes we went inside.

We walked through the squads of the facility. Nothing has changed since August 2014.

At the squad № 4 a «convict — activist» acted arrogant and rude, apparently provoking other inmates’ reaction by his behavior. This «activist» came to an appointment with us on 14 August 2014 when big committee was also there; that time she began speaking that because of such defenders everything is bad in the facility and relatives were worried with what we post on our site. I remember this «good-looking» convict well. That time there was a huge line with «activists». We realized that it was done intentionally in order to steal time from other inmates willing tell us about their problems.

He stood out again by cursing members of Public Monitoring Committee in front of five officers, one of which was Anton Vladimirovich Kozlov — chief of this squad. We’ve asked to record this incident, so they promised to fix it. 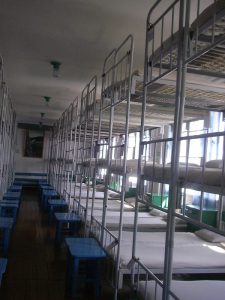 The next day that chief said he hadn’t heard or seen anything. We’ve checked sleeping premises of those squads. It was overcrowded — per inmate there is 90 cm of space. There are three — storey beds everywhere; wash-basins are not enough.

Only the squad № 1 was different from others with convicts under strict conditions.

10 convicts have been signed for appointment with us, one of them we couldn’t see because about 9 pm regular checks began in the facility.

During conversations with inmates we’ve found out that today in the cells under strict conditions and ward-type rooms there was not lunch and it always happens when committee comes over. Why didn’t they say it before? We may only guess.

Officers began giving food to inmates following the intervention of ours. 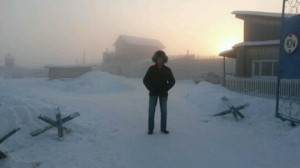 The next day on 10 January 2015 we went back to the penal colony № 63 with public inspections having notified in advance person-on duty of the Federal Service — Zakharov but we were not allowed again there, explaining that chief of medical department Nadezhda Kuznetsova had forbidden to. Why didn’t want to let us inside? Apparently, somebody is in danger there or with severe bodily harm.

We’ve talked to two convicts who wanted to make a video message how they had been subject to tortures and humiliations. Also they wrote petitions where they stated about unlawful actions towards them and asked to protect them.

After inspections we’ve made reports, petitions to Bureau of Internal Affairs, regional Federal Service for Execution of punishment, prosecutor office and investigative committee.