In October 2014 experts of Fund «For convicts’ rights protection» and attorneys found facts of mass beatings of convicts by jailers in Republic of Mordovia and also of obstruction experts in meetings with inmates for providing legal help.

Upon these facts human rights defenders have filed a petition into Mordovia Prison Directorate including denial of access to beaten convicts.

Having received a response from the Federal Service for Execution of punishment in Republic of Mordovia, human rights defenders were indignant with obvious lie which deputy chief S. V. Zabaykin covers himself with.

Certainly, applicants didn’t expect positive response but they hoped that upon obvious law violations inspection would be conducted and guilty people would be brought to justice. But apparently, S. V. Zabaykin and his team have decided to hold the line till the end and not to admit facts of law violations. 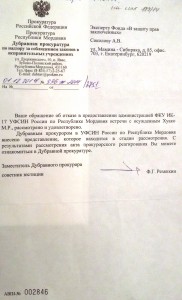 Investigative bodies have refused to initiate criminal proceedings upon facts of infliction of bodily injuries by officers of penitentiary system. These ruling will be challenged by attorneys if necessary even into European Court of Human Rights.

Broken heads and cruel photos of beaten convicts have been recorded in documents, that’s why all attempts of jailers to justify their crimes have nothing to do with Law and defenders are determined to prove it.