MENUMENU
Главная News Next court victory over the penal colony № 63… or how long...
Поделиться
Твитнуть

Yesterday on 28 January 2015 there was a court hearing at the Sverdlovsk regional courthouse where an appeal on a Decision of Verkh-Isetsky regional court was studied.

Let’s remind that on 20 September a court again declared actions of administration of the penal colony № 63 to be unlawful. This facility is famous for its tortures, beatings, humiliations and sexual abuse towards inmates. Unlawful actions were denial of access for a defender Aleksey Sokolov for providing convicts M. and T. with legal help. They were subjects to cruel beatings in this facility and in one more «torture chamber».

This time despite firm court practice there were serious battles at the Regional court. The representatives of the penal colony № 63 and the Federal Service for Execution of punishment didn’t want to admit legitimacy of a court decision. They kept «fobbing off» their submissions. They referred them to some recommended practice of Statistic service of Russia; besides it came to a point that human rights defenders file their statements on wrong set papers of Fund «For convicts’ rights protection» and it doesn’t match recommendations. In imagination of jailers those arguments were reasons for reversal of court decision.

Chairman of judicial division all the time tried to find out what kind of papers did Aleksey Sokolov show for a meeting with convicts. Why weren’t power of attorney and other documents attached to Charter of Fund and Expert ID? Why these documents were not listed? 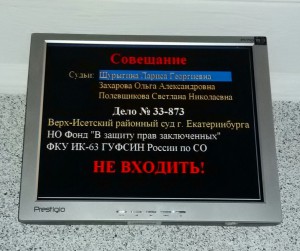 Aleksey Sokolov explained that all the documents were studied by a lawyer of the penal colony and law doesn’t say about it a word.

Judicial division was discussing this case for about 40 minutes and it was surprisingly. Before the Sverdlovsk regional court used to be determined in its decisions upon violation of a right to a meeting by jailers under art.89 of Penal Code of Russia. Chairman began catching at this point. Anyway judicial division consists of three judges and justice was served. The Sverdlovsk regional court upheld a decision of Verkh-Isetsky courthouse about unlawful actions of administration of the penal colony.

In general, position of the Federal Service for Execution of punishment surprises defenders. It is illogical… Why do they need all these courts upon the same cases?

However, after refusals in meetings, human rights defenders first of all try to solve a problem at the Federal Service for Execution of punishment; they call and file complaints. Only after another runaround from the Service (as a rule, from chief deputy G. N. Gubankov), human rights defenders address to courts and always find the truth exactly there. Would it be better to resolve existing problems without court battles, without another throwing mud at the Federal Service in mass media? Due to a fact that denial of access as a rule comes together with beatings of inmates and jailers obstruct defenders in order to hide these crimes.

Court battles are connected with denials of access for defenders are going either on local or regional levels. The guilty one is the Federal Service for Execution of punishment in the Sverdlovsk region which cannot learn from their mistakes…