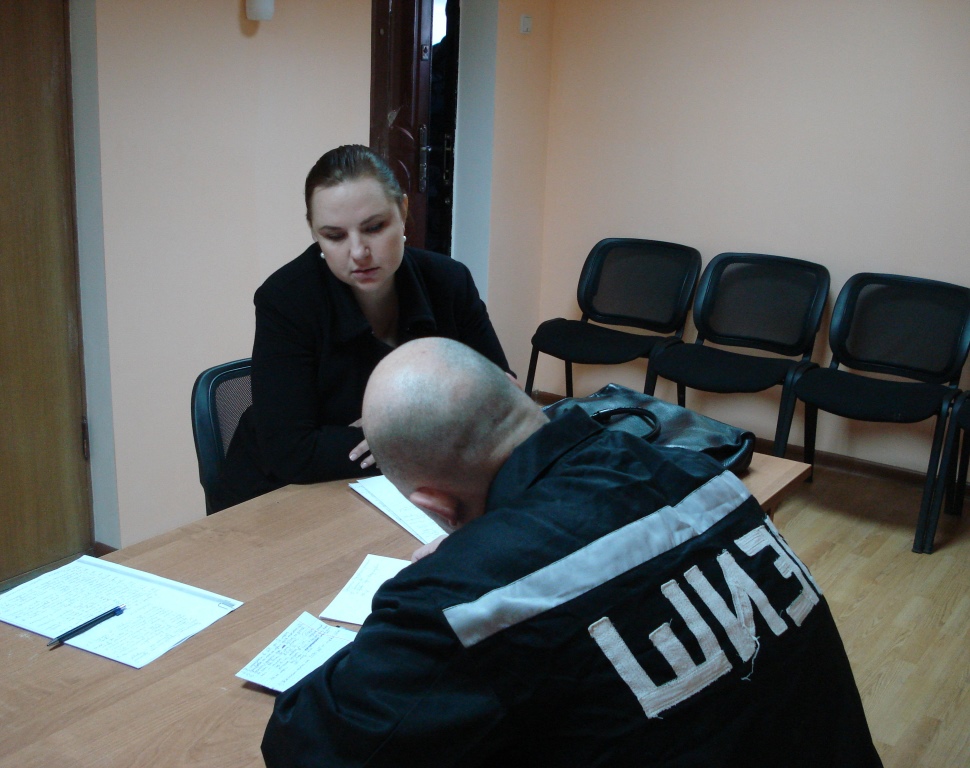 A condemned in «the Bolotnoe case» Sergey Vladimirovich Krivov, Candidate of Physical and Mathematical Sciences, father of two children has decided to have legal battles with administration of the penal colony № 5 in the Bryansk region.

The reason is omission to act of officers of the facility — they haven’t studied all the petitions and requests by Sergey Krivov; also he couldn’t  have phone conversations with his relatives upon arrival at the facility; employment without official documents, officers haven’t take statements of S. Krivov about sheltered employment — he is entitled to it by law; non-sending out his correspondence and many other problems caused by administration.  Even documents on behalf of Krivov were sent by a lawyer Irina Biryukova when she and Director of NGO «LEGAL BASIS» Aleksey Sokolov visited him in December 2014.

Court hearing at Starodubskiy regional court of the Bryansk region was appointed on 4 February 2015. Irina Biruykova and Aleksey Sokolov were surprised by a judge and court process in general. Judge G.I. Garbuz invited defenders in his office where he told them he had received additional materials from Sergey Krivov and petition from chief of the colony to question a witness — chief of squad and besides he personally visited the colony of Sergey and explained him complaints procedure, specified his demands which he had sent to chief of the colony; explained how to make a power of attorney for expert of Fund «For convicts’ rights protection» Aleksey Sokolov and gave instructions to chief to sign it. Judge demanded the production of documents. But court hearing was put off. In fact it will be on 18 February 2015.

Having left a courthouse, defenders made their ways to Sergey Krivov.

There were no problems with access and camera. Chief of the facility signed passes and defenders met with Sergey at a office.

Sergey wore a robe which is given to prison rules’ violators and it surprised Aleksey and Irina. They arrived at an idea that he had been punished for something but Sergey made it clear.

After a lawyer Irina Biruykova sent some complaints for his protection, he received threads: administration promised to make such conditions which will result in initiation of criminal proceedings as if Krivov attacked an officer. Then jailers began inciting inmates against him; jail «shakedown». Administration said that the reason of it is misbehavior of Sergey who complains everywhere. As a result, inmates began picking a bone with Sergey. He was scared that’s why he wrote a request about transfer into secure place. 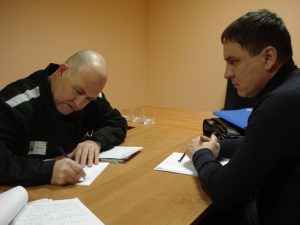 Secure place is located in solitary premises. Jailer put him into solitary; took all his stuff, food and gave a robe with a sign «solitary». In fact, he is being detained under solitary conditions. He is not allowed to drink tea or coffee, only — water.

Having heard Sergey out, expert of Fund «For convicts’ rights protection» and Director of NGO «LEGAL BASIS» Aleksey Sokolov addressed to chief deputy with a question: why do they violate law? Because Sergey Krivov was put into secure place but not into solitary — he is supposed to be under regular conditions.

Human rights defenders were assured that Sergey would get back his stuff and bring a bed-side table. A problem with TV occurred but officers said that there was no opportunity to do so.

Also Sergey told that he was prohibited to have legal books. During meeting, defenders gave him the Penal Code, rules of conduct of correctional facilities, papers etc. Sergey asked to bring different Codes, laws and regulations which defenders will get him next time.

Sergey thanked people for help and support with video message.

Irina and Aleksey promised officers and chief to check whether his requests are fulfilled next their visit or not. As for facts of threads towards Sergey Krivov there will be a claim filed into Investigative Committee.