On 13 February 2015 at the Federal courthouse of Vladimir began a court hearing upon denial of access for expert of Fund «For convicts’ rights protection»-Aleksey Sokolov to convicts according to p.4, art.89 of Penal Code into prison-2 in the Vladimir region. This facility is also known as «Vladimirsky central».

Let’s remind that  on 22-24 October 2014 Aleksey Sokolov  as expert of Fund and representative of a convict P. with power of attorney arrived at the prison-2 for legal consultations for his client. Sokolov has registered twice a statement about a meeting with convict P. Also it has been attached a cope of power of attorney to statement. He tried to show documents of Fund and ID of expert to chief of the facility but his attempt failed. A. Sokolov was waiting in the building for all day long but his statement wasn’t examined at all.

Defender doesn’t agree with this violation, so Aleksey Sokolov has filed a claim in court with demand to declare acts of warden to be unlawful. Besides, warden has not make a not about reasons of denial twice on 22-24 October 2014.

Representative of Fund «For convicts’ rights protection» — Larisa Zakharova has supported Aleksey Sokolov in the court.

Judge N.Kh. Batorshina has warned defenders that they were not allowed to sit at the table, because prosecutor and attorney sit there. So defenders had to sit down along the wall and took a chair to put their papers.

During court hearing representative of the prison-2 in the Vladimir region said that demands of defenders were unlawful and asked judge to dismiss a complaint. Lawyer of the prison referred it to absence of legal education of Aleksey Sokolov and power of attorney from a convict doesn’t provide defender with a right to legal help; A. Sokolov might give legal consultations in written form. Also, lawyer added that if there some urgent issues occur, Sokolov can send special delivery or dispatch to his convict. Besides, lawyer stated that Sokolov’s statement on meeting with convict had been considered in the procedure of Federal Law «On order of precedence of claims» and response will be sent for 30 days. 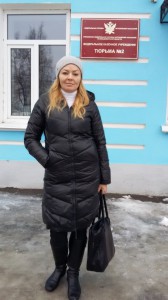 Further discussion with prison lawyer showed full illiteracy of her. Lawyer admitted that a statement for a meeting is considered in the procedure of Penal Code and Rules of Conduct, it means making a note about reasons of refusals on a statement according to p. 68 of Rules of Conduct but she added that all the statements are filed through special department of the facility and statement is filed through registry office then it is studied according Law » On order of precedence of claims». Nobody cares what applicant is asking for.

Judge N.Kh. Batorshina asked a lawyer: «What can an applicant do if he waits for one month and during this time a convict may die?» Response was overwhelming: «We act with the authority of the Law «On order of precedence of claims»!!!

— «How is a meeting provision regulated?» — asked judge,

— «Rules of internal conduct»,- says lawyer of the facility. Pause.

— «Can you show me these Rules the next court hearing?», — asked judge,

— «You can look up on the Internet, there is such information», replies lawyer!!!

Judge demanded to bring proofs on the next hearing that representative talks about, so-called «Rules of Internal Conduct».

As for defenders, judge asked to bring proof that they have high education in law and statement from convict towards Fund «For convicts’ rights protection» on the base of which representatives of Fund act.

All arguments that Laws and the Russian Federation Code of Criminal Procedure don’t put restrictions if defenders don’t have diploma in law didn’t convince judge.

Power of attorney given to expert of Fund Aleksey Sokolov for representing a convict also didn’t influence judge. At least in the course of this hearing judge made it clear that such power of attorney doesn’t provide with right to meeting with inmates.

What’s happening next, it’s matter of time. Court hearing was put off till 24 February 2015.

That day defenders Aleksey Sokolov and Larisa Zakharova tried to meet with convicts in the prison-2 in order to provide them with legal help. Having registered statement and all copies from Fund, they began waiting near the check-point of the facility.

After 4 pm chief of department -Igor Butov came out and said that their statement would be considered for 30 days according to Law » On order of precedence of claims «.

When defenders put a question: «What to do with p.68 of Rules of Conduct because chief of the facility has to point out reasons for denial». Igor Butov replied that he didn’t know and he needed to study Rules of Conduct!!!

Here is a good example what kind of people work in penitentiary system of Russia. They demand inmates to observe law but officers themselves don’t know laws at all.

Proverb says: » tell me with whom thou goest, and I’ll tell thee what thou doest » and we can paraphrase this proverb to chief of the facility: «tell me  who your officers are, I’ll tell who you are»!!!