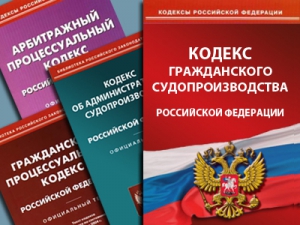 Deputies of State Duma have approved at the second reading the project of Code of administrative legal proceedings which is supposed to start working this autumn. Opponents to ideas of restrictions of freedom of legal representation tried to fight for the last time with majority but lost in the end. Supreme Court failed to drop part of works from regional into local bodies.

Work on the presidential project of Code of administrative legal proceedings (which came first at State Duma in March 2013) has stopped for an year due to unification of Supreme and Court of Final Arbitration. Now it’s coming to finish — today members of parliaments have approved it at the second reading. In general, root idea of President that cases on challenging regulations, decisions, acts or omission to act of state and local bodies should be considered with help of Code of administrative legal proceedings, when there is a necessity to protect «violated rights, freedoms and legal interests of people, rights of noncommercial organizations». Besides judges will be guided by the same rules while studying cases of challenging decisions and actions of Public Monitoring Committee.

Approved edition of a document ( see this 484 pages of document) says that deputies took care of ideas of Vladimir Putin and gave up on radical ideas like diversion disputes between business and office-holders from regulation of Arbitration Procedure Code. But not all original norms have survived through readings. For example, in the first place in edition of President there was a thing that cases about economic disputes are to consider at general jurisdiction court. Now there isn’t.

Plus  — cadastre, minus — state treasury.

Anyway serious corrections are included into Code. Deputies have decided to transfer disputes at general jurisdiction court on rules of Code of administrative legal proceedings because of cadastral values of real estate which will be base for tax calculation. It was expectable because last summer Federal Law-143 put such cases to courts on regional level; later there was an attempt to unload them. In December deputies were ready to pass disputes about cadastral values into local courts if price tag doesn’t succeed 5 million rubles in regions and 15 mm in Moscow and Saint-Petersburg.

But head of Duma Law Committee-Vladimir Pligin was doubtful of correctness of this way of thinking. He pointed out that it’s the first case when special status appears for federal cities in code of judicial practice. Deputy PM — Tatyana Petrova tried to convince him that «this approach is reconciled with The Ministry of Economic Development of the Russian Federation » but it wasn’t enough and in the final edition of document there was not division of courts depending on cost of a suit. Dmitry Vyatkin explained «Pravo.Ru» that Committee was guided by opinion that these questions should be studied jointly — with three judges but at regional courts this condition cannot be often observed.

Besides, deputies have recently ticked off cases about claims to budget means. «They will be studied according to other laws in force — Arbitration Procedure Code and Code of Civil Procedure», says Pligin.

Code of administrative legal proceedings for the first time includes qualifications restrictions into non-criminal proceedings: they have to have law degree. There were a lot of argues around this issue. On one side Supreme Court has attacked  which wants to see only lawyers and attorneys during court procedures, on the other side Tatyana Moskalkova and Dmitry Gudkov have criticized it demanding to refuse this norm. «This norm excludes a right of people to legal help from members of public organizations who are very professional in this field even if not having law degree «,-says Moskalkova. In her opinion, changes might result in situation when such representative can protect interests in European Court of Human Rights but not in Russian one.

Last battle has happened today at plenary session. «I think that it doesn’t work at all. We have even Candidates of Juridical Sciences without higher education. This new thing will take away interest to fight with state»,-he says and suggested to eliminate such demands from Code.

Pligin was arguing with both of them. He said that defense of thesis in law means to pass many additional exams. As a result, amendment of Gudkov went disapproved.

The same happened to suggestion of Gudkov to release people of public and religious organizations from claim costs reimbursements in case of defeat in court. This projected law has such favor so far only for invalids of I and II group and veterans of the Great Patriotic War but it seemed to him to be wrong. «We almost offer people to gamble: to pay and play there. We need to cancel it, otherwise there will be no point to go in courts-people will always lose,-said Gudkov.»

Pligin added that deputy should avoid at State Duma «comparison of state systems with some other things». «Million cases are considered now by courts and only in some cases there will be challenging. Credibility to court system is raising. We don’t have to misinform anyone. We are focused on credit to court system»,-said Pligin.

In the end 348 deputies have voted for adoption of document, one was against.  They are planning to study this document at the third reading this week in order to manage to pass it to colleagues from the Federation Council till 25 February. This document has to come into force on 15 September 2015.