MENUMENU
Главная News Can you prove that you sent a complaint?
Поделиться
Твитнуть

The reason of this trial is an appeal against omission to act of administration of the facility when officers had refused to consider all the claims and statements filed by Sergey to the Chief of the facility; refused to give an opportunity to have phone calls upon arrival; refused to notify relatives of Sergey about whereabouts of Sergey Krivov; employed him without official documents; refused to consider a statement of S. Krivov about provide him with alleviated detainment conditions which is supposed to be in accordance with the law; refused to send his correspondence; and a lot of problems made by jailers to him. Even claim has been filed by a lawyer of Sergey Krivov — Irina Biryukova.

During court hearings the representatives of Sergey Krivov: lawyer Irina Biryukova and Director of NGO «LEGAL BASIS», expert of Fund «For convicts’ rights protection» Aleksey Sokolov have supported him and his lawful demands and asked court to declare actions of Chief of the facility to be unlawful. They have pointed out in their explanations that complaints from convicts are not registered and applicants are not notified about receiving responses as Rules of Internal Conduct requires. There is no control for mailing of complaints in the colony.

The representative of the penal colony № 5 objected to satisfying Sergey’s claims and said that  convict hasn’t written complaints at all especially to the Chief. In evidence he showed a log of complaints and statements where it wasn’t registered at all. If complaints were not registered, it means he hadn’t filed them. Cast-iron logic.

In response to a question how responses for his claims were delivered if they were not registered in a log, the representative answered that they register only internal statements in this log which filed to the Chief and as for other claims sent into different law-enforcement bodies, documents about mailing are attached to identification record.

In the course of court hearing human rights defenders found out one interesting thing. According to Krivov, he was working for a month on industrial area of the colony, at first manufacturing artificial flowers, then assembling carton things but he wasn’t officially employed and didn’t get money.

Chief of the facility confirmed to defenders that Krivov was provided with works but due to refusal of entrepreneurs to place orders in the facility, works were not given to Sergey anymore. But at court the representative stated that convict Krivov was not employed, didn’t get money and didn’t apply for a job.

In response to a question of defenders if convict Krivov was on industrial area, the representative said yes but not for work only for excursion. That time he was shown places  where he might work. He had two such excursions.  Why Sergey didn’t take a job, officer couldn’t explain. 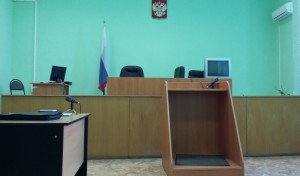 Thus, Sergey Krivov was offered a job but for some reasons he decided not to take it and there were no statements like refusals from works. Due to this fact, it’s reasonable to suppose that convicts of the facility are like slaves there, administration doesn’t formalize documents and doesn’t pay salary.

Besides, chief of the squad -Denis Emelyanenko was questioned in the course of trial; he said that he has never received any complaints from Krivov; Sergey has never asked about job placement. Denis didn’t conduct personal works with convicts, and his job is to keep discipline and cleanness in the squad.

It was weird to see an officer who doesn’t know his duties.

Judge of the Starodubskiy court — G.I. Garbuz has refused to satisfy Sergey’s demands.

Nevertheless, this case is not over. The representatives of Sergey Krivov — Irina Biryukova and Aleksey Sokolov are going to file a claim into the Bryansk regional court to challenge decision of the Starodubskiy court. If necessary, even further into superior bodies including international.

Problem to confirm that he had passed his statements, claims, appeals etc. has been found in the course of court hearing and it concerns not only Sergey Krivov but all the prisoners. To resolve this problem changes must be done in legislative system. So this is exactly what NGO «LEGAL BASIS» and lawyer Irina Biryukova intend to do as soon as possible.