General of the Federal Service for Execution of punishment: Sergey Khudorozhkov has decided to block cell phones numbers; probably he doesn’t know any methods to fight against independent members of Public Monitoring Committee.

Thus, on 23 July 2014 by order of General somebody sent a mail to cellular carrier MTS with request to block sim-card of member of Public Monitoring Committee — human rights defender: Larisa Zakharova. Due to this fact, she had to address to court in order to get her rights protected from unlawful acts of General.

On 25 February 2015 at the Verkh-Isetsky regional court of Yekaterinburg trials upon Larisa Zakharova’s appeal about declaring request of the Federal Service for Execution of punishment to block her cell phone to be illegal for over than a month. 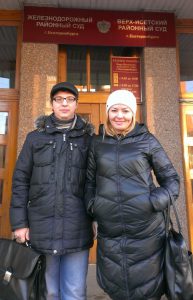 It’s worth to mention that this is case of first impression, at least human rights defenders don’t know about such cases. However, they know that very often various prison bodies block sim-cards of unwanted people.

Besides, Larisa Zakharova is a member of Public Monitoring Committee of the Sverdlovsk region, expert of Fund «For convicts’ rights protection», a member of Transregional center of human rights; she actively protects rights of prisoners  which are violated in the correctional facilities of the Sverdlovsk region. 24/7 relatives of convicts or convicts themselves who need legal help are calling her. Also Larisa Zakharova is mother of three kids and she need to be in touch with them.

During trial it turned out that apart from information from some officer of the Federal Service for Execution of punishment that arrested people in the pretrial detention center-1 use number 89826029546 in order to threaten witnesses and their relatives there is no evidence at all.

Defender Larisa Zakharova said that this sim-card was used only by her, not given to anyone else. It was confirmed by carrier MTS: since 1 January 2014 till September 2014 she was the only one using this number, also there mentioned where and when bearings were taken. This sim-card was not changed. It eliminated the possibility of sim-card being in the pretrial detention center-1.

Version of the Federal Service for Execution of punishment was this way: Larisa Zakharova went into the pretrial detention center-1, passed her sim-card to arrested and then got it back.

In fact, opinion was like they have a right to block phone number of any person on grounds information of any criminals.

Civil case upon upon member of Public Monitoring Committee Larisa Zakharova’s appeal has been considering since December. Finally court battles are over with decision of Verkh-Isetsky regional court presided by judge A.A. Reutova who declared decision of the Federal Service for Execution of punishment to block phone number of Larisa Zakharova to be unlawful.

However, one more fact remained unsolved- Sverdlovsk officers demanded from MTS information how many sim-cards Larisa Zakharova has.

It should be noted that all illegal actions of the Federal Service for Execution of punishment took place when she and other members of Public Monitoring Committee found serious violations in the penal colony № 63 in Ivdel which is considered to be torture chamber. Due to this fact, they had to launch a hunger strike.

Human rights defenders of the Urals despite all actions of the Federal Service are ready to defend their opinions based on HUMAN RIGHTS.