Relatives of a convict A. has addressed to Fund «For convicts’ rights protection» who used to serve his sentence in the penal colony № 11 in Perm area where he died on 17 January 2015.

Relatives told defenders that convict A. served sentence from April 2014 and he was disabled person due to his chronic diseases (cardiology, diabetes, oncology etc.) He was sent into the penal colony  № 9 for case follow-up by medical workers.

In October 2014 relatives asked to transfer him to another facility (the penal colonies № 38, 29) but they were refused because at those facilities there was no technical capacity and professionals. 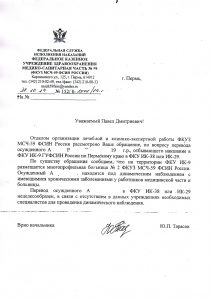 In December 2014 for some unclear reasons convict A. was dismissed from the hospital and transferred into the penal colony № 11 where also there were no specialists.  The representatives of the Federal Service for Execution of punishment in Perm area couldn’t explain relatives who had made such decision and who was in charge for that?

First heart attack happened at 1 am on 17 January, later two more heart attacks occurred at 8 am and 3 pm.

Convict A. died at 4:30 pm on 17 January in other words 15 hours later from first attack. According to family members, during that time medical worker didn’t provide convict with necessary medical treatment and didn’t call ambulance. They think that death of A. was caused by unlawful decision of unknown authority from the Federal Service for Execution of punishment about transfer A. from the penal colony № 9 to № 11 where he was not provided with urgent medical help and also by acts of medical worker.

Therefore defenders have sent claims from Fund «For convicts’ rights protection» addressed to Chairman of Council of Human Rights under the President of the Russian Federation, Head of the Federal Service for Execution of punishment, Prosecutor General, Head of Federal Service on Surveillance in Health Care and Social Development of the Russian Federation t conduct inspections on legitimateness of transfer of convict A. and failure to provide him with medical help.