At the Frunzenskiy regional courthouse in Vladimir the first phase of court battles was over between Fund «For convicts’ rights protection» and administration of the prison-2 in Vladimir region.

Let’s remind that in October and November 2014 expert of Fund Aleksey Sokolov who is also representative of convict P. arrived at this facility in order to meet with convict for legal support.

Administration of the facility didn’t study his requests for meeting and of course it didn’t give a meeting.

Aleksey Sokolov doesn’t agree with it and as representative of convict he went to the court.

Judge N. Batorshina was studying circumstances of the first two denial of access happened on 22 and 24 October 2014. She was doing it very attentively and with great deliberation.

Experts of Fund: Aleksey Sokolov, Larisa Zakharova and Roman Kachanov participated in several trials upon this case. They represented interests of organization and convict P. whose right to legal help had been violated.

Point of representatives of Fund and convict was based on law of the Russian Federation in particular on p.4, art. 89 of the Correctional Code which says: «Convicts are provided with meetings with attorneys or other persons who have a right to do it…», as well as on p. 8, art. 12 of Correctional Code which states: «Convicts may obtain a lawyer or other persons who have a right to provide convicts with legal support». There are no any restrictions for legal help by representatives of human rights organizations or attorneys-in fact who don’t have diploma in law.

Provision of meetings is guided by Correctional Code of the Russian Federation and Rules of Internal order.

Point of administration of the facility which was represented by a lawyer of the prison was simple: Sokolov made a request as a regular citizen; he didn’t show any proof that he has Diploma in Law; his request was registered in the front office; it means request had been considered under Federal Law «On deliberation procedure of citizens’ requests»; during 30 days applicant would get response. Also representative of prison referred refusal to Law «On free legal help» whereunder only persons with Diploma in Law may provide convicts with legal help.

Representatives of Fund during court hearings explained that arguments of prison representative are not based on law, Thus, neither Correctional Code nor Rules of Internal Conduct say about such requirement for «other persons who have a right to provide convicts with legal help» as presence of Diploma in Law in order to meet with them. Otherwise it’s only rule-making of administration of the facility. Reference to Federal Law «On free legal support» also absolutely incorrect because this Law is not workable here. In particular, mentioned Law establishes State system of free legal help which is financed from budget sources. Meanwhile, Fund «For convicts’ rights protection» is not included in system of provision of free legal help and such activity is not financed by budget sources. Besides, in this Federal Law there is no such category of citizens meant for free legal help as convicts.

Applications for meetings with inmates are studied by administration of the facility on grounds of p. 68 of Rules of Internal Conduct and articles of Correctional Code and they cannot come within Law » On deliberation procedure of citizens’ requests». In other words, these are obvious things which human rights defenders had to explain to lawyer of the facility.

Judge N.Kh. Batorshina (who has 13-years record of service; in July 2014 he was given the fifth class) considered this case quickly and deliberately taking into consideration Law and handed down decision to satisfy asserted claims. 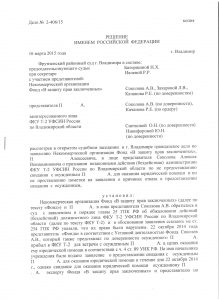 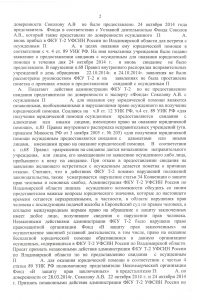 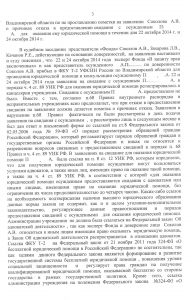 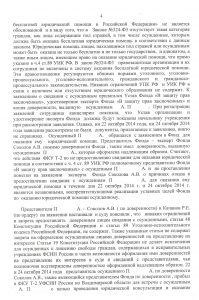 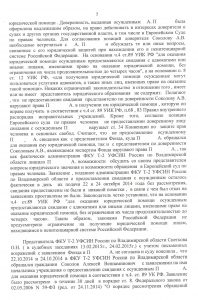 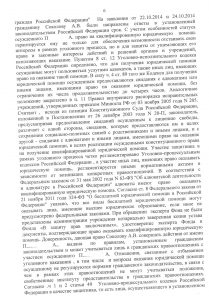 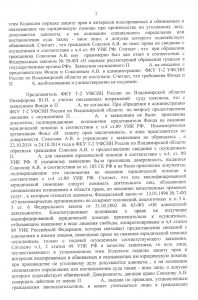 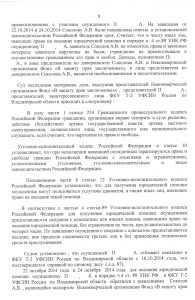 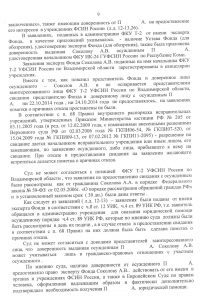 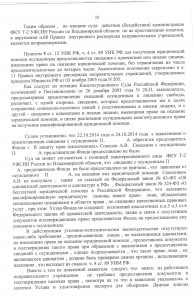 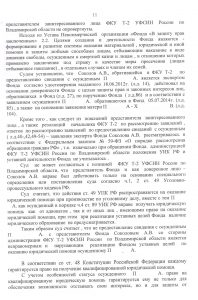 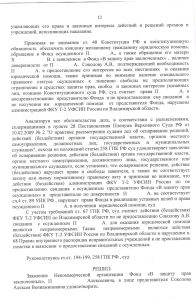 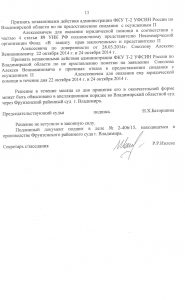 Thus, judge in her decision was guided not only by statutes of law of Russia but also of international…

Another case upon denial of access for Aleksey Sokolov on 5 October 2014 was considered by judge E. V. Teltsova who named as adverse claimant the Federal Service for Execution of punishment in Vladimir region for some unknown reasons; but applicants didn’t have any questions for them. In opinion of human rights defender Aleksey Sokolov, judge sometimes asked questions not to the point. In speech of attorney Roman Kachanov there were norms of international law, but judge said that international law is irrelevant in this case and European Court of Human Rights is far away…

In the end claim of Fund was satisfied partially. Judge declared acts of administration of the prison-2 to be unlawful when officers didn’t leave mark about reasons of denial. Judge did not agree with denial of access fact for Sokolov and pointed out that Aleksey Sokolov had asked meeting in confidential mode and he doesn’t have a right to it. So she turned this demand down.

Representatives of Fund were surprised by such decision. Confidential meeting… what has that to do with it? When meeting was not provided either confidentially or another way. In asserted claims applicants clearly said that administration didn’t give meeting with convict and it violated law and right of inmates to have one.

Little observation: judge Teltsova had the fourth class and as a judge she has worked since 2007.

Courts in our country work surprisingly. They hand down different decision upon the same cases. Judge Batorshina who is professional handed down based on Laws of the Russian Federation and judge Teltsova who puts aside international law, handed down decision which is more than far away from asserted claims.

Decision of Teltsova will be challenged soon in Vladimir regional court.