MENUMENU
Главная News There was an attempt to shut down Human rights organization with help...
Поделиться
Твитнуть

On 22 April 2015 human rights defenders finished court battles against Ministry of Justice of the Sverdlovsk region.

As we informed before, in October 2014 Main Directorate of Ministry of Justice filed a claim to terminate works of Public organization «Transregional center of human rights» as juridical entity due to «some violations of law on public organizations». Organization didn’t file short notice about continuation of its activity.

Ministry of Justice in the Sverdlovsk region intended silently to shut down the oldest human rights organization of the Urals which was  found by Vladimir Sheiklein without notifying organization itself. Besides, members of Public Monitoring Committee Larisa Zakharova and Svetlana Malyugina work in this organization. 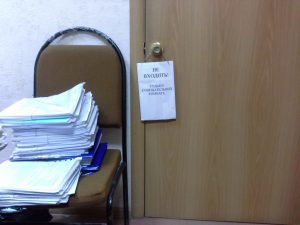 Then court decision of judge Volkomorov happened which satisfied demands of Ministry of Justice which has been famous for its fight against civil society of Russia lately… He did it without even considering the case where it’s obvious that «Transregional center of human rights» was registered on new address in the Oktyabrsky district, consequently claim should have been filed into Oktyabrsky district courthouse; he did it without considering a protocol of one of conference of «Transregional center of human rights» where they had signed for violations elimination.

Of course, Ministry of Justice and judge Volkomorov  and Tax Service could not see that. It means it was usual collusion between them aimed at killing «Transregional center of human rights» as juridical entity.

Accidentally, representatives of «Transregional center of human rights» found out about court decision against organization. Due to this fact defenders filed a claim to cancel judgment by default; judge Volkomorov satisfied it and upon appeal of Roman Kachanov this case was transferred into the Oktyabrsky district court of Yekaterinburg. 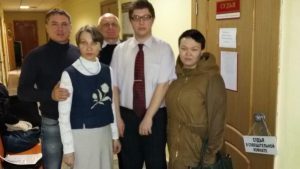 So in the Oktyabrsky district court defenders defended their right to further work. Judge Kaigorodova turned down a claim of Ministry of Justice.

Activity of human rights defenders bothers the Federal Service for Execution of punishment in the Sverdlovsk region. Likely that this claim showed up due to regional Service which its activity focused on battles with defenders they don’t like.

Let’s remind that right after hunger strike of defenders near the building of the Federal Service, General Khudorozhkov sent a letter to police department № 9 where he demanded to bring defenders to administrative responsibility for «unlawful walkout».

Also the Federal Service for Execution of punishment run by Khudorozhkov blocked sim-card of defender Larisa Zakharova because «this sim-card was used in the pretrial detention center for criminal purposes». Such arbitrary actions of Head against representative of public organization become usual.

Actions of the Federal Service blocking sim-card of Larisa Zakharova are declared to be unlawful.

Despite all the pressure, work of Human rights defenders of the Urals for HUMAN RIGHTS is going on…