On the website of the Investigative Committee of the Sverdlovsk region was posted information about successful conviction of 38-years old Central Asian for actions directed to arose enmity or discord as well as to abasement of human dignity on account of religion in public.

Gravamen was the following: having served sentence at the penal colony-5, convict A. in front of other inmates made some abusive statements towards several social and religious groups. By these actions convict A. caused hostility and hatred as well as abased human dignity on account of religious beliefs. 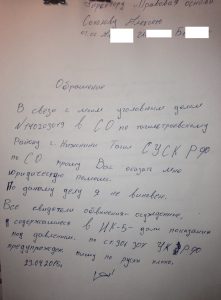 Criminal case was initiated by the investigative department in Nizhny Tagil. Investigator was A.O. Usatov who doesn’t notice tortures towards convicts at the penal colony-5. Usatov questioned «convicts-activists», took it as a basis and sent criminal case into Prosecutor office, from where it went to court.

Court hearing took place in the office of penal colony’s warden: Laptev. All the materials collected by the investigative department and prosecutor are declared to be full for sentencing.

Human rights defenders got interested in this unique case, when convict serving sentence for drugs, commits new crime but of extremist nature.

By request of defenders on 23 April 2015 lawyer Fedor Akrchermushev visited convict A and questioned him personally. Convict told that he had already sent appeal to the Sverdlovsky regional court and asked for help because he doesn’t consider himself as guilty one.

According to him, he had filed oral appeal to investigator Usatov to question witnesses confirming absurdity of this charge. But investigator rejected it due to illiteracy of convict.

Defenders are going to «break» strange case in the Sverdlovsk regional court by giving real evidence.