On 28 May 2015 there was a human rights trip of experts from Fund “For convicts’ rights protection”: Larisa Zakharova and Svetlana Malyugina to Ivdel.

This trip was organized to participate in trial at the Ivdel court and of course inspection of inmates in solitaries of the penal colony-63.

In 30 minutes after arrival electricity disappeared in the facility; it was not a big surprise. Defenders believe that it had been done intentionally in order not to admit them to the convicts.

Svetlana Malyugina left expecting decision in the front office and Larisa Zakharova went to the Ivdel court to find out about trial and court decisions for convict Mikhail Tregubov.

Unfortunately, meeting with inmates was not provided; there were no authorities in the facility. It seemed like something happened in there. 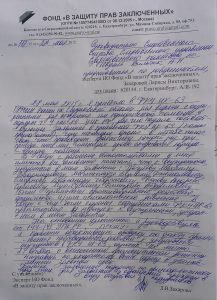 As for this incident, Larisa Zakharova wrote a complaint into the Investigative Committee in Ivdel which she couldn’t register because after expectation in the penal colony-63 defenders were inspecting temporary detention facility where they checked detainment conditions and inmates. After this in the investigative committee there were no officers. 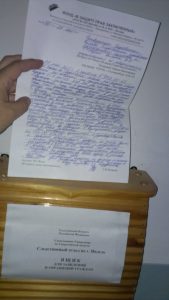 Defenders had to drop their complaint for special box in the Ivdel prosecutor office.