On 29 May 2015 I was working when my dad called me and said that police officers came over with truant officer (Anna Mkrtchyan) from police department-9. They were there because of request from Ombudsman of the Sverdlovsk region (due to anonymous letter about my misbehavior; as if I have left my kids).

My father said that he had seen a request from T.G. Merzlyakova to check me and my kids. My father is old man; he might get a stroke if he worries a lot.

On 30 May 2015 lawyer Roman Kachanov and I arrived at the police department-9 to get it sorted. 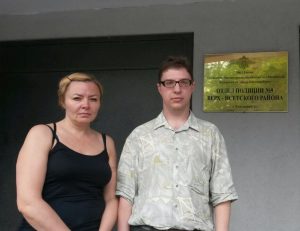 I didn’t take my children with me because you can expect anything from officers.

Truant officer Anna Mktrchyan met us quietly and with understanding. She asked us to understand her actions because she had to react; it was request from social policy officers who had received a letter from Ombudsman. 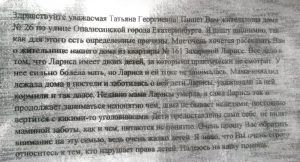 Anonymous letter says: “Hello, Tatyana Georgiyevna! I’m writing anonymously, I have some reasons. I’d like to tell about tenant of our building, her name is Larisa Zakharova. The thing is Larisa has two kids and she didn’t look after them. Her mother also was ill and Larisa didn’t care either. Mother is disabled and Larisa’s kids were taking care of her. Not long time ago her mother died but Larisa keeps doing something unknown. She has been out of her home for weeks. She has spent her time with some criminals. Kids are left to themselves; they don’t have mom’s care. I am begging you to pay attention to this family. I know you strictly punish those who violate children rights. I count on you.” 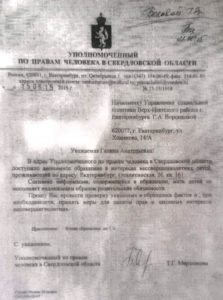 To this letter “special task” has been attached from Ombudsman where she informed that she had got anonymous letter concerning minors. According to information, mother of them doesn’t observe parental duties. I am asking to conduct inspection, if necessary-take measures.”

Truant officer took an explanation from me and asked to come to see her with kids to talk to them.

At 5 pm I brought my kids, they answered questions about their life. They told what they eat, have lots of toys and love their mom.

To question of inspector if mother made them look after my mother, my elder daughter replied that no way, we did it because we are family!

I also told about work and many people don’t like what I do, I am a member of Public Monitoring Committee and I always speak about human rights’ violations.

Let’s analyze some events of my work:

I can conclude that I am being a threat to bad officers of different state bodies while doing my work.

But it won’t stop me; I will keep fighting with disregard of laws by finding such officers who bring discredit on laws of the Russian Federation.