Director of Association «Legal Basis» Aleksey Sokolov and Head of «Transregional center for human rights» Roman Kachanov on 26 June 2015 visited a convict Sergey Krivov who is serving his sentence at the penal colony-6 in the Bryansk region.

Let’s remind that Sergey Krivov is Candidate of Physical and Mathematical Sciences; he has two kids. Now he was charged in the «Bolotnoye» case. He were serving in the penal colony-5 in the Bryanskaya region where with help of officers he was put into secure place. At the moment he is in the penal colony-6.

Defenders faced another inspection by officers from the Federal Service for Execution of punishment run by Sergey Moroz. 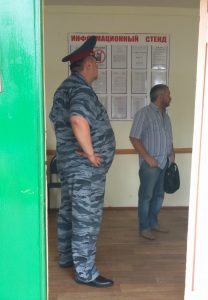 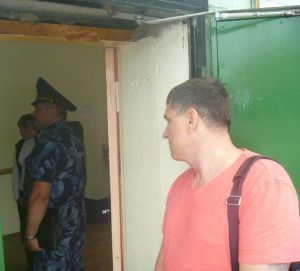 The first place where they went was a room for receiving packages and parcels. Sergey Moroz took complaints from relatives of inmates and called up all the officers. He tried to figure out why in the prison shop there is not enough foodstuff and living essentials. He made comments on a lot of things.

Defenders got a meeting with Sergey Krivov with no problems. This was warden of the penal colony-6 Yuri Nikulin showed that he knows laws of Russia. 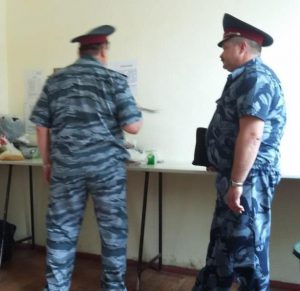 Sergey was surprised and happy at the same time. He thanked defenders for help. Sergey looks well. He told how officers had taken him to prison hospital-2 in Bryansk where he had had 17-days medical check-up. He had no complaints about it. 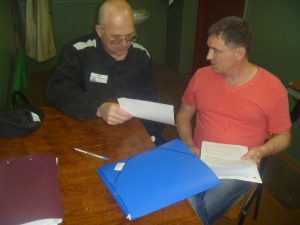 In the penal colony-6 detainment conditions also are good, no complaints from him. Administration treats him well. Sergey had an opportunity to make phone calls. He is allowed to walk outside. Compared to the penal colony-5 he feels much better. Now Sergey has two disciplinary records: from the penal colony-5 because he sat down on the bed at the wrong time; another one from the pretrial detention center in Moscow.

Due to it, Sergey turned down his request for parole. Disciplinary punishment will end in December 2015, then Sergey is going to file a motion.

Defenders asked him if his complaint has been filed to European Court of Human Rights. Sergey said that he doesn’t know; his attorney was supposed to do it. Sergey is worried about it.

Defenders promised to get in touch with attorney and sort it out.

Sergey thanked all the people who support him and send postcards and letters. The biggest number of postcards are from Spain: local branch of Amnesty International.