Blatant disregard of law in the Federal Service for Execution of punishment in the Sverdlovsk region.

Members of Public Monitoring Committee: Larisa Zakharova and Olga Dianova were not admitted for prison-46 inspection.

Other members were inside that time.

Inmates of the prison-46 are still on a hunger strike.

According to the Federal Service for Execution of punishment, more than 500 inmates are on hunger strike. According to people released from the facility, much more; about 700-800 inmates.

Those inmates don’t attend canteen, but they work, observe art.106 of the Correctional Code. Everything is the same but they starve.

Larisa Zakharova and Olga Dianova have addressed to the Federal Service, to Georgy Gubankov. No result. 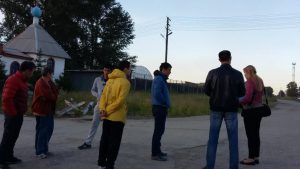 Relatives of inmates were near the prison.

Tatyana Merzlyakova deceived other members of Public Monitoring Committee that she hadn’t seen Zakharova and Dianova.

Members of Public Monitoring Committee: Larisa Zakharova and Olga Dianova were not admitted inside again. From prison other members Vasily Rubakov and Sergey Kirillov came out. They didn’t come up to Larisa and Olga. They got in the car and left. 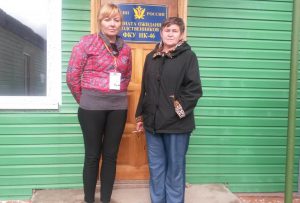 Then officers showed up to walk members but they ordered to leave audio and video devices. Members went into the office of chief deputy. There inspection was over. Chief deputy Churilov came over and said that Zakharova and Dianova were not allowed to inspect the facility. Besides, he told how he had suggested inmates settlement: they begin to eat and they will get a meeting with defenders.

Olga Dianova and Larisa Zakharova happened to be inside of the facility. Hunger strike was over. Inmates began to eat.

Defenders walked through squads-2, 3, 5 and 7. It was obvious that inmates were expecting us. They wanted to talk to us.

They have fear for being transferred to other correctional facilities. They are afraid of officers and problems with them.

Some inmates have already been asked who is in charge for hunger strike..

Inmates told about reasons for this strike: officers beat to death their friend; he was detained into solitary where officers enchain convicts to grate.

On 3 July 2015 inmates heard that Akbarali were screaming. Then screaming stopped.

Members of Public Monitoring Committee: Anton Kudryakov and Larisa Zakharova inspected again prison. They went into solitaries, ward-type rooms. There were no so many convicts as it was.

One convict was in the secure place because of a conflict in the quarantine zone where «convict-activist» had beat him up. Officer said that on Monday there would be a disciplinary committee and he would be punished.

In the end of the inspection defenders visited squad under high security. Many inmates said that  investigator didn’t question them and they want to tell about beatings and tortures.

All the complaints have been sent to investigative committee.