For several years Association (earlier- Noncommercial partnership) «Legal Basis» have been through numerous inspections by Prosecutor office, Ministry of Justice. The reason of such «activity» is team work of defenders who try to find and prevent tortures, murders, rapes and humiliations at the correctional facilities in the Sverdlovsk region.

«Legal Basis» used all means and ways to get financing from various sources. Thus, defenders have got money from Russian budget through «Civil dignity» as well as from foreign NGOs of UK and USA. They spent money in the public interest: office rental, transport charges (trips of defenders, members of Public Monitoring Committee and lawyers to penitentiaries, courts etc.), purchase of office equipment, payments for mail delivery, state duties. Nobody could raise a claim that defenders were spending money on their own needs; on contrary each inspection showed that budget was spent according purposes of organization.

However, using political issue, Prosecutor office and Ministry of Justice made claims that organization is «foreign agent».

Prosecutor’s office’s notice of violation to «Legal Basis» was written out on 26 May 2015 and defenders were given one month to correct violations which means to sign up as foreign agents. But not waiting a month on 8 June 2015 Ministry of Justice drew a record about administrative violation towards «Legal Basis» and sent it to court.

In that record completely rewrote claims of Prosecutor office. In particular, attempts to influence national policy, shaping of public opinion, trips to penitentiaries, trials. Thus, officers confirm that national policy is about not to observe laws but application of tortures, humiliations and murders.

On 3 July 2015 Ministry of Justice included Association «Legal Basis» in a list of NGOs which are «foreign agents».

On 22 July 2015 judge Olga Terentyeva declared record about administrative violation to be lawful and fined «Legal Basis» 300 000 rubles for refusal to declare themselves «foreign agents».

During court hearings prosecutor deputy A.Kazantseva and E.Tsivileva agreed with arguments of our organization, that trips to prisons have nothing to do with national policy but in general activity aimed to change policy?!

Then representative of prosecutor office stated that it’s not allowed to point out problems of penitentiary system as well as drawbacks of authorities and it brings harm to national policy.

According to prosecutor, we may conclude that if prison officer torture inmates, let them do it; it’s supposed to be that way and we shouldn’t have spread information about it…

Attempt to challenge prosecutor’s notice of violation failed. Judge Yuri Savelyev reading out his Decision (to dismiss our claim) said with a downcast look said that defenders will have a right to challenge this decision.

Now financing from foreign noncommercial organization from USA has stopped. In August 2015 project of «Civil dignity» has been over also. Defenders doesn’t do commerce because they cannot make money on poor people.

Enormous fine is difficult to pay up. As a result, Ministry of Justice will shut down «Legal Basis».

Most of jailers and prosecutor’s officers will be glad that «Legal Basis» died. 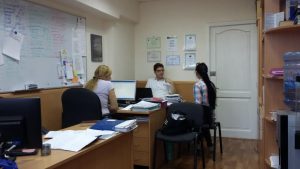